Travel wages in December didn’t fare well even though what’s been dubbed the “tridemic” by many health experts continues to wreak havoc on hospitals and health systems throughout the nation. COVID-19, influenza and RSV (respiratory syncytial virus) continue to stress the healthcare system, decreasing hospital capacities and exacerbating staffing shortages. All three illnesses infect the respiratory tract, are contagious and can spread quickly. They also have similar symptoms that make it difficult to tell them apart without appropriate testing. Experts fear another winter Covid outbreak could further push health systems to their limits.

According to data from the U.S. Department of Health and Human Services, the overall utilization of inpatient hospital beds nationwide was just over 77% as we entered the new year. The number of ICU beds in use was also slightly above 77% across the nation. However, some states had utilization rates above 85%. Between December 27, 2022, and January 2, 2023, the CDC reported that new hospital admissions of patients with confirmed COVID-19 infections totaled 5,541, up 17% from the previous 7-day average. Surprisingly, healthcare travel wages primarily trended down in the last month of the year, despite hospitals filling up. 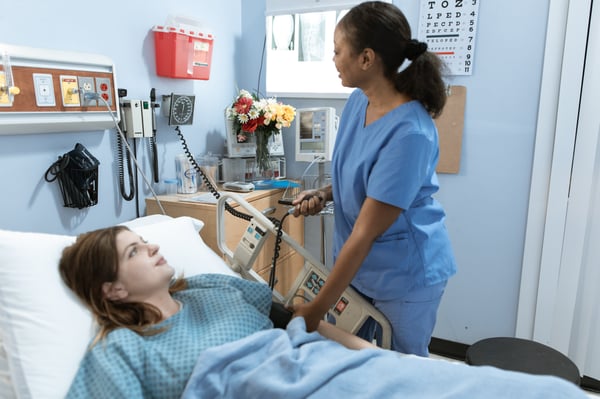 November’s healthcare travel pay increased in 40 states and the District of Columbia. It was the second consecutive month with more states posting increases over decreases, as October travel wages also saw increases in 29 states. November had the highest number of states with increases since January 2022, in which 43 states posted gains.

After two months of rising travel nurse wages, December had a significant slowdown and decline. Only three states recorded increased healthcare travel pay of at least 1%, with a fourth close at 0.9%. While the two states with the second and third highest increases changed compared to the last two months, the state in the highest slot remained the same.

For the third consecutive month, Delaware had the highest healthcare travel wage increase nationwide at 2.3%. This state posted a 22.1% in November and a 22.9% increase in October. Delaware’s inpatient bed utilization at the end of 2022 totaled 83.9%, including 11.51% used for COVID-19 patients. The state was also using 80.11% of its ICU beds.

In a complete flip from last month, 33 states reported decreases in travel wages in December 2022. This number marked a vast difference, considering only one state had a drop in wages in November and five had declines in October. It’s the most states with a reduction in travel wages since the 38 posted in September 2022, the same number reported in August 2022.

States Where Wages Stayed the Same

Fifteen states landed on the unchanged list because the difference in weekly travel pay in December compared to November changed by less than 1%. However, of these 15, only three states and the District of Columbia showed an increase. California had a change of 0.9%, just missing the 1% mark to place it on the list of states with travel wage increases. Conversely, North Dakota and Connecticut had decreases of 0.9%, just missing being placed on the list of states with wage decreases.