Heading into the holiday season and winter, travel wages are once again on the rise. In November, all but a handful of states posted higher travel wages, including a few relatively significant increases. Like healthcare travel pay in October 2022, numerous respiratory illnesses, continued staffing shortages and other ongoing issues in the healthcare industry have rates for travel nurses and other medical professionals increasing, in some states more than others.

Hospitals previously inundated with coronavirus patients are now dealing with a trifecta of respiratory illnesses, and many facilities across the nation are becoming overwhelmed again. A combination of COVID-19, flu and RSV infections severe enough to warrant a hospital visit is causing a shortage of beds similar to spikes during the pandemic.

As beds fill, staffing shortages become an even bigger issue as the already overburdened healthcare system can’t keep up. Several medical facilities across the nation announce they’re already in a state of distress, which many fear will only worsen with winter’s arrival. Besides the shortage of beds, numerous hospitals continue to be very short-staffed.

According to the Bureau of Labor Statistics, 527,000 healthcare and social assistance workers quit their jobs in August 2022. In September, 505,000 more quit, followed by another 515,000 in October. Some workers quit their healthcare positions due to burnout exacerbated by the COVID-19 pandemic, and others are considering getting out of the field per Vivian’s 2022 Healthcare Workforce Survey.

Staffing shortages aren’t just being felt among doctors and nurses. Hospitals and other healthcare facilities are also missing allied health professionals like technicians, respiratory therapists and other professionals in positions they typically have difficulty filling. Thus, healthcare travel wages are up in multiple disciplines.

Despite federal funding to support the increased costs of travel nurse wages ending in spring 2022, healthcare systems with less financial flexibility have nonetheless continued to at least partially rely on travel workers to fill their staffing gaps. However, some hospitals are trying to retain their permanent staff through pay increases and bonuses or develop internal float nurse pools that can act as in-house travel nurses. Either way, the demand for contract labor hasn’t completely diminished, and as the need for interim staff rises, so does healthcare travel pay. 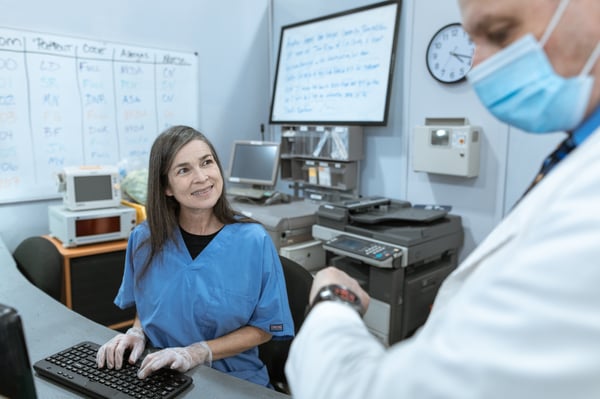 Last month saw 29 states post higher healthcare travel wages, the first time since January 2022 that more states had increases than decreases. In November, that number jumped even higher. All but 10 states posted gains of at least 1% or higher, just three less than in January.

Five other states posted double-digit increases in November, and the line-up is nearly identical to the previous month, with four of the five New England states.

Montana was the lone state posting a decrease significant enough to count in November. However, travel wages only dropped 2% in this state, so average pay went from $2,492 weekly to $2,443.

States Where Wages Stayed the Same

Nine states posted changes of less than 1%, placing them on the unchanged wages list. Nebraska nearly broke 1% with an increase of 0.8%, meaning travel wages increased slightly by $22 per week. The two states with the most negligible changes on this list were Wyoming, with a .01% increase, or $2 per week, and Oregon, with an 0.1% decrease, or $3 per week.