After a major spike in COVID-19 cases about mid-January, cases have steadily dropped across the nation. The daily average number of cases on the first day of March was 58,503, which had fallen to 27,845 by the last day of the month. This new average is exceptionally mild compared to the high of 805,062 average daily cases recorded on January 15. The extreme drop in cases may have prompted March’s consistent decline in healthcare wages.

March marked the first time since February 2021 that all 50 states reported a drop in healthcare pay rates. The uniform decrease was vastly different from September 2021, when all 50 states recorded an increase in healthcare wages, but further confirms the usual trend of wages mimicking COVID case counts. 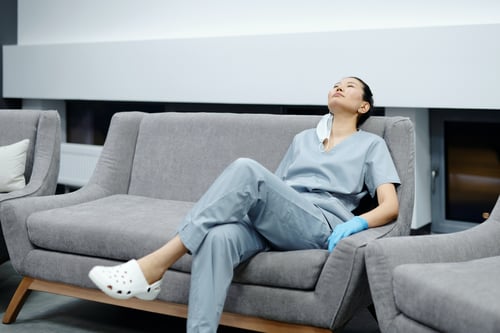 States With Wage Decreases of 10% or More

Like the rest of the nation, Missouri saw COVID cases sharply rise in January with 26,322 new cases recorded on January 18, the largest number of the year. From there, cases steadily declined. By the end of March, the daily average had dropped to 524 from a high of 13,968 on January 24. By late March, many Missouri hospitals reported zero COVID patients for the first time in more than 24 months. These hospitals included several SSM Health locations, Freeman Health System in Joplin, St. Luke's Hospital of Kansas City, and Mercy Hospital in Springfield.

States With Wage Decrease of Less Than 10%

While the remaining 21 states also recorded drops in healthcare pay rates, their decreases were on a smaller scale. The state with the smallest decrease in healthcare wages for March was Hawaii with a drop of just 1%. Hawaii was one of only six states that recorded a wage increase in February, but the bump in pay was only 1.7%. However, the state recorded a more substantial 4.6% increase in January.

In March, Omicron BA.2, nicknamed the stealth variant, became the dominant strain globally with nearly 86% of all cases sequenced matching this variant. While health experts consider BA.2 even more transmissible than other highly contagious mutations of the Omicron variant, evidence suggests it isn't any more likely to cause severe disease. The unchanged severity is good news, but its ease of transmission has made Omicron BA.2 easy to blame for the major surges.

The stealth variant officially became the dominant strain in the U.S. by late March. COVID cases continue to fall but for how long? If the surges occur in the U.S., cases may rise sharply along with healthcare wages.

One major disadvantage that states may be working under if another surge occurs is that many places are shutting down COVID-related programs like testing sites in light of the declining numbers. Without the additional support of these programs, it could put an even greater strain on hospitals and hospital staff. Facilities still battling being understaffed could see significant salary spikes again as they attempt to entice workers, especially nurses, to jump back into the fray. However, health experts have said it’s too early to predict whether the U.S. will see another significant wave in the coming months.

Moira K. McGhee has been a professional writer since 1999. She’s written 1,000s of print or digital feature articles, blogs, advertorials, how-to guides, and landing pages throughout her career. Her work has been featured in several nationally distributed magazines, on numerous websites, and in two super-fun cozy crime anthologies. Moira especially enjoys writing about nurses and the amazing jobs they do!